It’s too often I read a story that starts out with a bang only to retreat back on itself in the proceeding paragraphs. Then the story must progress to the timing of the bang later on, where it occurs naturally in the span of narration. This opening bang is generally referred to as the Hook. It doesn’t have to be a literal bang, but it’s usually something provocative or mysterious.

Are all hooks bad? No, of course not. But I don’t enjoy hooks that read like afterthoughts. If I can remove the first sentence or paragraph from the story and nothing changes, then your hook was planted solely to act as a lure. “Gotcha! Now you have to finish the story in order to know what that meant!”

(This is different than starting in media res, which is the equivalent to parachuting into the middle of the action and filling in the backstory later. The story still moves forward.)

I’ll illustrate my point with a hastily drawn diagram: 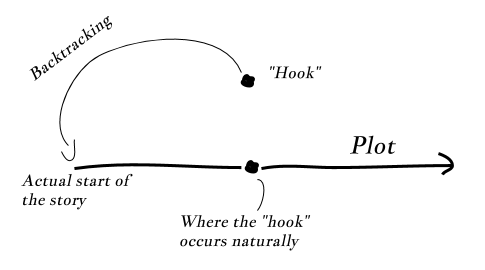 As you can see, the hook is floating up there by itself. Because it’s told out of sequence, it must be accounted for again later, taking up valuable space where the story should be happening organically.

So I have to wonder when I encounter something like this, was the story written for an audience or an editor?

As a reader, just as an editor, my time is limited. I want to read good stories from start to finish. But with magazines and publishing companies demanding to be “hooked” in the first lines of a story, the story is prone to shift into the gimmick territory. Like a photograph on a resume, bad hooks are only there to grab someone’s attention. And when used as a gimmick, the hook says nothing about the merits of the story itself.

To put it in another perspective, imagine giving your reader a taste of ice cream and then swapping out their sundae for a plate of broccoli before they can finish it.

First, if reading your story is like eating broccoli, no hook is going to save it, no matter how appetizing it looks. Second, even if your story doesn’t taste like broccoli, why are you serving the courses out of order? It’s almost as if the writer doesn’t trust the reader anymore, that we readers must be baited with this promise of something more interesting to catch up to later.

My solution? Hook us with the story itself. Start at the beginning. If the beginning is too boring, don’t insert a slice of the middle to entice us—write a better beginning instead.

If you need an example of what I consider a good “hook,” here’s the opening to one of my favorite short stories, from Uncanny‘s first ever issue, called “If You Were a Tiger, I’d Have to Wear White,” by the awesome Maria Dahvana Headley. (It’s one that I can come back to and read again and again and it even inspired a piece of my own.):

The lion sat in a lounge chair, his cocktail coupe full of something redder than bourbon and darker than blood. He lapped at it unhappily, his eyes settling on nothing in particular. He was flanked by two aging blondes in tarnished spangles, their diamante balding, but still impressive, even in the unforgiving light of the California afternoon.

The story not only grabs hold of the reader, but it actually progresses into the plot right afterward, with backstory interspaced where necessary.

I won’t list an example of what I think is a bad hook—you can read about it when I find one to post in one of my reviews. However, if you ever come across a story that starts with an Event and then immediately follows it with something completely unrelated (boring, even) in order to set up the foundation leading to the Event, then there’s your bad hook.

A shiny, clever hook may work for catching fish, but if you want to catch a reader, give them something more to chew on first.