Black Dandy is a new quarterly magazine from New Zealand, “in the long tradition of slow-simmering strange fiction.” I was asked by one of its premiere authors, George Salis, to review the first issue, after he read my review of his story “The Thinker” here on OOTW. You can find the magazine’s website here.

Firstly, there is no greater compliment to me than when an author reads and responds to a review I wrote, whether or not they found it to be favorable. (In Salis’s case, it was.) Actually, I should say, there’s no greater compliment except when the author requests you to review another piece. The feeling I get for being recognized like that is immeasurable.

That said, I was offered a review copy of Black Dandy, but declined it and paid for the Kindle edition instead. My mantra is if I can afford the copy of a magazine or book that I want to review, I will pay for it myself. The sentiment is appreciated, however. 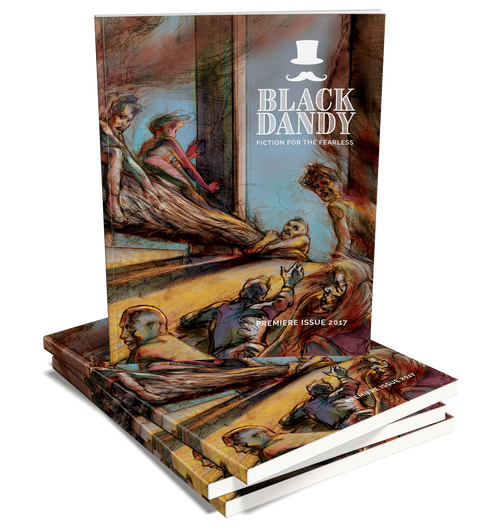 Black Dandy presents itself as a magazine of stories that feel real enough to be “right around the corner” while blurring the lines of surrealism and magical realism. There are ten stories in the premiere issue and this review will cover the first five.

These stories are on a spectrum of what I’d call hyperrealism all the way to “journal entry” real life. Will we experience the slow-simmering strangeness, as proclaimed by the magazine, or is Black Dandy just another faux-dark entry into an already overly saturated faux-dark market?

Salis is up first with his story, “The Second Skein.” It’s a strong opening, unsurprisingly, although I still enjoyed “The Thinker” more. “Skein” is incredibly strange. The heavy use of alliteration was off-putting at first, and other readers may find the subject matter too taboo to finish (it’s about the 9/11 terrorist attacks in New York). It’s also purposefully herky-jerky, in a life-flashing-before-your-eyes sort of way, where one moment you’re following the reaction of a character to the scene as it unfolds, then next you’re in their childhood, reading about a terrible nail-biting habit and wondering how this is all going to make sense in the end. And it probably won’t, but I suppose that’s the purpose: How can you make sense of what happened on that day?

“Herself in Soft Materials” is the second entry, by Charles Wilkinson. It’s likewise just as odd as “Skein,” but not as creative. It felt unfinished, starting with a canvas of this family: Stockbroker mother, unengaged father, spoiled brat son. They’ve come to a quaint storybook-like village for a well earned retreat—her well earned retreat, that poor, insomniac mother. But then it tapers off. Father and son are forgotten while mother gallivants off into a fuzzy dream state. I had a hard time keeping track of the setting after that, feeling just as lost as she did.

“Sad Car, Happy Car,” by Guinotte Wise, could be the spiritual successor to TC Boyle‘s “Greasy Lake” at first blush. Compare these two passages. Can you spot the original?

These are white, white guys, mostly skinny, some are muscular, all are hard, their lack of tan is habitat-related; dark garages with strong scents of gasoline, naphtha, whiskey, beer, solvents, lubricants and grease suck them off the streets like siren songs to passing ships, like lizards into leafy ground cover. […] They become feral from the semidarkness, the Lucky hanging from their lips, competing with the toothpick which rolls back and forth, back and forth.

We were all dangerous characters then. We wore torn-up leather jackets, slouched around with toothpicks in our mouths, sniffed glue and ether and what somebody claimed was cocaine. When we wheeled our parents’ whining station wagons out into the street we left a patch of rubber half a block long. We drank gin and grape juice, Tango, Thunderbird, and Bali Hali. We were nineteen. We were bad. We read André Gide and struck elaborate poses to show that we didn’t give a shit about anything.

The answer is, of course, the latter, but squint just a little and the former might as well be its fun house mirror image.

So I had high hopes for “Sad Car, Happy Car,” but the further I read the less convinced I became that it was a successor and not some unpolished imitation instead. But there’s real potential in this story. Had it not u-turned so sharply, had it stayed focused on the character at the beginning, given him something meaningful to do, it could’ve shined. Wise has the flair for Americana—the setting feels Rockwellian—but by midway, with no tangible plot or character arc set into motion, the wheels fell off and I was left stranded, thumb raised for a lift to the real Greasy Lake.

I wish I knew what “Need in the Age of Consent,” by Lora Rivera had to do with magical realism. It lacks anything strange to hold onto, except for maybe (?) some brief hints at vampirism (but why be so coy about it?). Rather, it reads like a tidal wave of divulged information, rushing to tell (and not show) me about this carnal, phantom “she” and her catalog of sexual exploits. Rushing so quickly it trips over itself to explain:

She’d been fifteen and he nineteen and he was into it, what she was into, and so part of it back then and still today was that with him she never felt like a freak, not once. Even when they got carried so far away on the swell of it that he ended up tenderly holding her hand in the hospital.

Who is “she”? What does she want, besides sex, cat food, laxatives, and yogurt? Writing can be like a game of poker: I can understand wanting to hold back your hand, but you’re going to have to show me the cards eventually otherwise I’ll never be able to figure your story out.

Rivera is an accomplished, talented writer, but out of all the stories I read for this first review, this one felt the most out of place. I never found it to be surreal or strange. It could work in another collection I think.

At the halfway mark we arrive at “Sandbar, Stop-Motion,” by Mason Boyles, which provides a sturdy support column for the first half of the issue, and was strong enough to give Salis’s story competition as my favorite so far.

It’s even more herky-jerky than “The Second Skein,” unraveling itself in spurts of evocative, colorful language. And it’s dense, chocked full of these expensive words, but like a tuxedo at a suburban dinner party, more often than not it feels overdressed. Don’t let that dissuade you, though. It’s a wild read.

It begins with the events that happened after the end. One of those, “It all happened when . . .” In fact, there’s even a “It started with the Sweeney twins” line on page 2 of the story, which I would have preferred as the cold open instead. Everything preceding that line is information useless to me until I’d already read “Sandbar” the first time.

The premise is two detectives start an investigation into a missing poodle, soon to become entangled into a larger mystery involving stolen posing trunks (of the Mr. Universe variety), Play-Doh voodoo dolls, stop-motion ghosts, and Sudoku. I’m not joking, it’s that absurd, and I loved it.

My biggest gripe is I wish Boyles had had more room to develop the mystery, and most importantly, slow things down. There are entire passages of something happening, but I can’t tell what. At the pivotal end (spoilers?):

What happened then—well, you’d have to ask Buford for metaphysics. All I know is the way the thing stained my own senses. A burnt sound, glowing smells, then a feeling like spacers between every cell in my body. And what I saw? Well, stinging. A detonation exceeding us. My watching and watched parts both steamed off equally, and by the time they consolidated I was flat-backed on the pavement.

There’s enough material here for a full-length novel, but maybe I’m asking for too much. I doubt Boyles could muster the energy to sustain “Sandbar” for that long. Stories as rapid-fire as this one always risk petering out too soon in novel form, or risk reader’s fatigue when there aren’t enough breaks to come up for air. For now, it’s a well-needed metabolic boost to Black Dandy, and I can’t wait to see what follows.