Been a busy year, but we’re finally back with another Naked Truth review, a “no punches pulled” diagnosis of a published book as if it had showed up in a writer’s critique group. Full disclosure: I have met this author at several science fiction conventions and found myself surprised at both his youth and humble demeanor. Rich is really the “young gun” of short science fiction (with over a hundred stories published by his mid-twenties), so I payed hard cash for this debut novel at my local Barnes & Noble, wondering how much of my $16 will eventually trickle his way…

But let’s pretend I’ve never met the guy and dive into this modern retelling of a classic sci-fi premise, the old “aliens show up and disappear the adults so it’s up to kids to save the world.” There’s plenty of mileage left in this trope, so how did Larson handle it?

On first glance, Annex reminded me A LOT of this old science fiction series I must have read in middle school: The Tripods. There’s something about this type of book where the same elements have to be in place:

• the parents have to be gone or disabled

• there can’t be any help from the “outside” world

• a defector from the alien side helps the kids

• the reader learns the history of the invasion

• despite having interstellar technology, the aliens somehow can be killed with MacGyver’ed weapons (in this case, squirt guns filled with [spoiler]!)

Larson “checks all the boxes” in a sense, and in doing so, he’s constructed a real page-turner. Let’s break it down with the three big “+’s” for what I feel he got right and three big “Δ’s” with what I think should have been reconsidered.

Every author leans on one of the three “cornerstones” of story—plot, setting, or characters—and Larson’s strength is in the latter. The two main protagonists are Violet, a teenager who identifies as transgender, and twelve-year old Bo, a boy whose family has recently emigrated from Niger to what I assume is the United States (or the city might be in Canada, the author has left the setting vague intentionally). If words were brushstrokes, Larson paints a vivid emotional picture of both these characters, leaving the reader feeling as if they are their intimate companions. The supporting cast also have distinct voices, and Gloom is my favorite hive-mind creature of recent memory.

Using the classic “camera over the shoulder” limited third person POV technique, Larson alternates between Bo and Violet in a way that gives the plot an enchanting rhythm. I read this book over a four-hour flight and only put it down once, at the end of the first act before the kids finally get to the alien ship. The tension between the characters is played up nicely, leaving the reader feeling as if they are walking a taut wire throughout the prose.

One of the big draws for me with this story was the idea of the “Parasite” installed in the kids’ belly buttons (Matrix-style) that lets them “burn holes through reality” or however else you’d want to describe it. Without spoiling anything, I’ll let you know that Larson handled this “superpower” in a way that left me satisfied as a reader and as a science fiction writer, which is a lot more damn difficult to do than you’d think. The Parasites are exactly why I read science fiction—they are a cool premise and a new concept that are delightful to read about, even if Larson hand waves a lot of the science behind their actual functionality. Something about genetic keys? Whatever. More reality-burning! I think he purposefully went softer on the technical details because this book is geared towards younger readers, which leads me into my first criticism…

Here are the “Δ’s”, or what should have been changed.

Δ This book should be on the YA shelf

Sorry, Rich. No matter how many times a kid swears or even if they all decide to get drunk one night (seriously, even the under-10s get hammered? really?), if you’ve got a 12-year old and a 15-year old protagonist, the book is solidly Young Adult. With a few minor edits, it’s really not all that different from something like those old Animorph books at the nostalgic Scholastic Fair, remember? Their covers were like visual crack.

What’s more interesting to me—and maybe I will have the guts to ask the author if I’ve had a few cocktails at the next convention—is whether he or the publisher made the decision to put it on the science fiction shelf. Perhaps they were trying to use his clout as a science fiction writer in order to pump up sales? Or maybe they felt that the book would have been lost in the avalanche of all the other YA titles ? Or maybe Larson was unwilling to admit the book was YA?

In any case, I do feel a bit slighted as an adult who purchased a book that might resonate more with an audience half my age. The Ancillary Justice style cover with the impressionistic planet/ship combo should have been scrapped, I think.

This book is held up by the characters, with a plot that kicks along pretty much okay. The main weakness is in the setting, as the completely fantastical elements, for example, the ship and the “pods,” are described in a clinical way that I guess works on a strictly technical level, but they never feel alien, which is a big problem. The reason why authors like Poe and Lovecraft (xenophobia notwithstanding) are still being talked about and read today is because their works were transformative. Those authors, along with others like Wollstonecraft and later, Philip K. Dick and Ursula K. Le Guin, were able to build a sense of depth that eroded the words into the “fictive dream,” dissolving the text away, and unfortunately, Larson doesn’t hit that way for me. But he’s young and this is his first full-length book—I am hopeful that he only continues to improve his craft.

Δ Didn’t Rick and Morty already do this episode?

It’s so hard to write science fiction nowadays. I’m not sure why people like Rich and I even bother. The amount of shit that’s already been done is so monumental that it’s nearly impossible to write anything new. 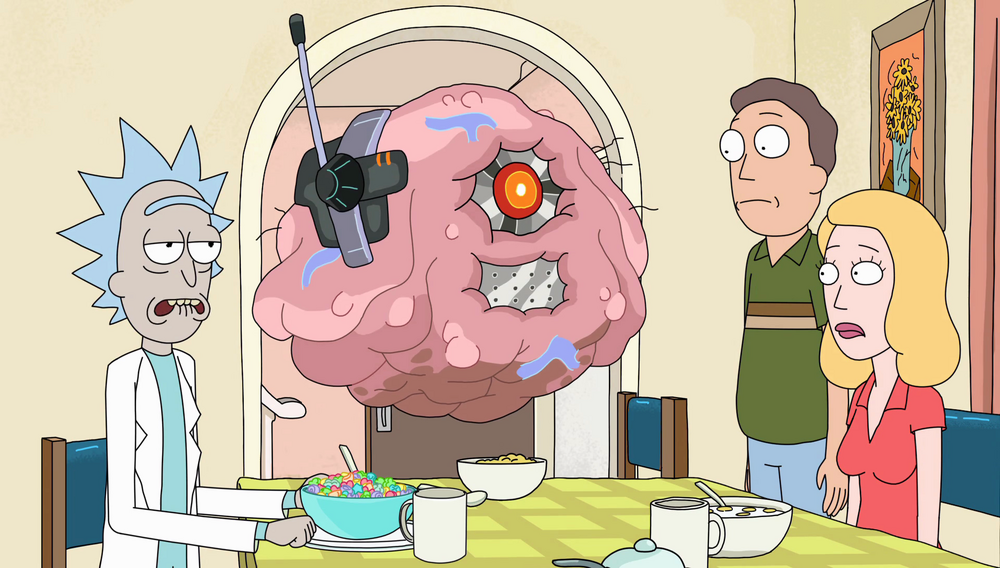 I’m fairly well-read in science fiction, as I imagine Larson is as well, so let’s compare the different tropes working in Annex with its predecessors without me doing any research:

I’m one of those science fiction readers who finds the genre appealing because I love new concepts, like the Parasites, and unfortunately the overuse of “recycled” tropes was a let-down for me. A younger reader probably wouldn’t notice, however, which only strengthens the case for making this book YA.

It is interesting to note that one of the most compelling and “new” things Annex does is feature a well-thought out, transgender protagonist. The portrait of Violet as a tortured teenager experimenting with hormone therapy is compelling—this serves as the main theme for the book—as the “alien changes” of puberty are coinciding simultaneously with the actual alien invasion. The fact that the most ground-breaking concept in Annex is that it features a contemporary transgender character rather than focusing on the whacked-out alien technology signifies a fascinating shift in the tastes of modern readers: this genre is no longer about the science fictional future…

It’s about the science fictional present.

Pick up a $16 copy of Annex and decide for yourself. And Rich? I’d hammer you with requests to do more “setting” details in your next novel, but instead we’ll end with the mantra of newest generation:

The book is out there in the world now, so obviously whatever you’re doing is working. Keep it up.

(also, everyone should read Delaney’s terrific Trouble on Triton, as it predicted a lot of today’s social concerns surrounding gender and was written 40 years ago)